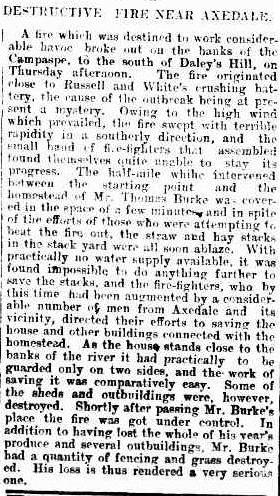 DESTRUCTIVE FIRE NEAR AXEDALE.
A fire, which was destined to work considerable havoc, broke out on the banks of the Campaspe, to the south of Daley’s Hill, on Thursday afternoon. The fire originated close to Russell and White’s crushing battery, the cause of the outbreak being at present a mystery.

Owing to the high wind which prevailed, the fire swept with terrible rapidity in a southerly direction, and the small band of firefighters that assembled, found themselves quite unable to stay its progress. The half-mile which intervened between the starting point and the homestead of Mr. Thomas Burke was covered in the space of a few minutes and in spite of the efforts of those who were attempting to beat the fire out, the straw and hay stacks in the stack yard were all soon ablaze.

With practically no water supply available, it was found impossible; to do anything further to save the stacks, and the firefighters, who by this time had been augmented by a considerable number of men from Axedale and its vicinity, directed their efforts to saving the house and other buildings connected with the homestead. As the house stands close to the banks of the river it had practically to be guarded only on two sides, and the work of saving it was comparatively easy.

Some of the sheds and outbuildings were, however, destroyed. Shortly after passing Mr. Burke’s place the fire was got under control. In addition to having lost the whole of his year’s produce and several outbuildings, Mr. Burke had a quantity of fencing and grass destroyed. His loss is thus rendered a very serious one.

*Please note:  Punctuation and paragraphs have been added to the above transcription for ease and speed of reading