BRUTAL ASSAULT ON A CON STABLE AT AXEDALE.
A PRISONER RESCUED.

Joseph Teasdale, 40 years, laborer of Woodend, a man of powerful build, was presented before the mayor (Mr. S. Ryan) and Mr. J. Watson, on three separate charges of inciting a prisoner to resist arrest, assaulting the police, and doing damage to Government property at Axedale on the previous day.

Inspector Hehir prosecuted.
Mounted Constable Kerr, who limped feebly, into the witness box, stated that he was on duty at Axedale township at 12.20 p.m. on the previous day, when he found 15 or 16 men who had arrived with a thrasher, drinking at the Campaspe Hotel. One of the number named John Roche, became most insulting in his remarks, and used very bad language. Witness therefore arrested him for using obscene language.

He was proceeding to the lockup with his man, when Teasdale followed them up and said that no constable should lock his mate up. The constable told the man to go about his business, but he further incited prisoner to resist, and said “If I have to do six months you won’t take him.” at the same time striking witness a violent blow on the ear and knocking him down.

Witness still stuck to his prisoner, but Teasdale kept striking him, and dragging the prisoner away, and finally freed Roche, who ran away into the bush. The constable, considering that Teasdale was the worse offender of the two, determined to arrest him. Teasdale, however, threw him, and, when he recovered his feet kicked him in the abdomen. He was very violent, and said not a policeman in the force could take him.

Witness was becoming exhausted with the severe struggle, but fortunately Mr. Edward Drake, licensee of the Campaspe Hotel, came to his assistance. The combined efforts of the two men were powerless to secure the prisoner, who fought and bit desperately. A second civilian, named Denis Doody, came to their assistance, and after a struggle lasting for half an hour they at length handcuffed Teasdale, and placed him in the look-up.

The three who had effected his arrest were completely exhausted. The constable was bruised all about the body and had his hand bitten. Mr. Drake also had a finger severely bitten and sustained injuries about the body.

When in the cell, prisoner behaved like a roaring boast, and smashed to pieces the utensil there. The man was not drunk, and had only had two drinks in Axedale. Witness stated that be would be unfit for active duty for a week. It was very fortunate, witness added, that prisoner was not placed on a more serious charge. If it had not been for the assistance of the two civilians he would have been seriously injured.

Prisoner: I have no recollection of anything. I have never been in a court before. I have always been in the habit of assisting the police instead of taking action against them. I don’t know what occurred. I can’t ask any questions.

Edward Drake stated that the constable was in a very exhausted condition when he came to his assistance. They did not secure prisoner until he had kicked the constable on the head, and used his teeth pretty freely. The man was not under the influence of drink.

Prisoner further stated that before arriving, at Axedale, he had had eight or nine drinks at an hotel. As a rule he did not drink, because he once had a sunstroke. He was very sorry indeed for what he had done. It was his first offence. He was a married man with a family to support and wanted to get back to them.

The chairman said prisoner was charged with very serious offences. If it had not been his first offence the penalty would be very severe, for his conduct was most brutal. He was fined £2 for inciting to resist, £2 for assaulting the constable, £1 with 7s 6d for damaging property, or one month imprisonment in default, and ordered to pay 33s 3d costs. Prisoner asked tor time in which to pay. Inspector Hehir objected to the request, and it was refused.

*Please note:  Punctuation and paragraphs have been added to the above transcription for ease and speed of reading 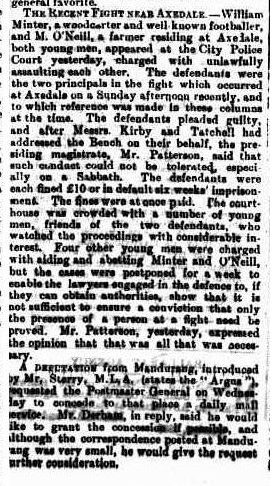 ” The recent Fight near Axedale.—William Minter, a woodcutter and well-known footballer, and M. O’Neill, a farmer residing at Axedale, both young men, appeared at the City Police Court yesterday, charged with unlawfully assaulting each other. The defendants were the two principals in the fight which occurred at Axedale on a Sunday afternoon recently, and  to which reference was made in these columns at the time. The defendants pleaded guilty,  and after Messrs. Kirby and Tatchell had addressed the bench on their behalf, the presiding magistrate, Mr. Patterson, said that, such conduct could not be tolerated, especially on a Sabbath. The defendants were each fined £10 or in default six weeks’ imprisonment. The fines were at once paid. The courthouse was crowded with a number of young men, friends of the two defendants, who watched the proceedings with considerable interest. Four other young men were charged with aiding and abetting Minter and O’Neill, but the cases were postponed for a week to enable the lawyers engaged in the defence to, if they can obtain authorities, show that it is not sufficient to ensure a conviction that only, the presence of a person at a fight need be proved. Mr. Patterson, yesterday, expresed the opinion that that was all that was accessary.